the Russian Invasion of Crimea 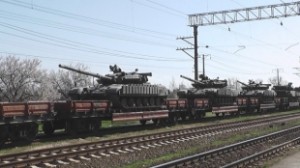 Contrary to popular belief, there has not actually been an invasion of the Crimean peninsula. The media likes to paint a much more dramatic picture than what exists in reality. The region’s military personnel have similar uniforms to that of the Russian army. As a result, people have reported that the country has been invaded by their formerly communist neighbors.

That said, Crimea is still in a precarious situation. The Russian president, Vladimir Putin, has placed Russian troops at the border surrounding Crimea. The Russian military has also taken over the airport and important buildings. Yet, this is not an “invasion” per se as Russia claims this is an act of self defense.

The main question is what they think they are protecting themselves from considering the recent revolution in Ukraine that has left the country weak. If anything, Ukraine will be focused on rebuilding from the inside out instead of trying to wage war with Russia. The idea of them potentially bringing their revolution to Russian borders is absurd, and this is why the media has been having a field day. There is no reason for Russia to have thousands of soldiers surrounding Crimea against a non existent threat.

One of Putin’s claims for self defense is that Russia is in danger if the threat in the Ukraine reaches the Crimean region. He says there is strong opposition against Russia, and that the civil unrest in the country could prove to be a volatile situation on their borders. Apparently, ethnic Russians in Crimea need to be protected to the point that the military of Russia needs to take over the Ukraine’s armed forces. Fortunately, there has not been any gun shots fired officially, but it is only a matter of time.

In fact, the reports are constantly changing. Armed men have started to take over buildings in the region. Russia is seeing how far it can push the Ukrainians before they revolt. The world is watching, and things could get messy if Russia acts with military force. European leaders will have to act if they want to protect Ukraine from invasion. The likelihood of that happening is slim, but it has not yet been ruled out.

Ukraine is actively seeking admission to the European Union, and a Russian invasion will instantly change things for the country. Many experts are comparing this situation to the Cold War. Russian says they are not doing anything even if they are being incredibly testy. The whole thing could accumulate in one misunderstanding. If anything, Crimea deserves to be free to make its own decisions.

In short, the Crimean peninsula is part of modern Ukraine. It was given to the country over 50 years ago, but it still maintains a separate republic. However, it has always been historically part of the Soviet Union before it was dissolved. There has always been an influence of Russian culture, but Crimea also has its own distinct identity. Many wonder if Crimea would succeed to become its own sovereign nation. That possibility seems unlikely considering the power of Russia.

Its location on the Black Sea make it a prime outpost for anyone who wants to control the waters in the region. Thus, the current dispute makes Russia look shady when it comes to their intentions. World leaders are carefully watching with the anticipation that the situation continue to climax. There is no arguing that this problem is far from over.

The Result of a Revolution

One of the biggest concerns of Russia’s supposed invasion is that the government just happened to choose this time to act on Ukraine. The country has just expelled their president and was in the middle of re-establishing order. Ukraine was solely focused on getting itself back together with new and better order. It is at this moment that Russia decided it would be best to place a few thousand active troops near the border and in the Crimean region. This happened when Ukraine was weak and preoccupied. The whole situation is just a little too coincidental for some analysts.

The revolution in Kiev cannot be blamed. Chances are Russia would have eventually made any excuse to take over. The revolution just happened to provide a sufficient reason to install troops in the name if self defense. One thing is certain, Crimea is in the midst of a life changing situation. Its citizens will have to decide where they belong even if just to themselves.

Posted in Army
« Previous Next »